The purpose of the wall which runs down the spine of Kocadağ is a conundrum , the one thing that seems to be fairly certain is that it isn’t Lelegian as it bears little comparison to any other known Lelegian structure on the Bodrum Peninsula.
G E Bean suggested that it may have been an earlier fortification which was abandoned, before completion, in favour of the wall that enclosed the whole of the Kocadağ headland and the city(1). In an earlier paper Bean and his associate C M Cooke speculate that the construction is similar the northern section of the main circuit wall at Halicarnassus(2) These views were supported by A W McNicholl(3), and the accepted consensus was that the wall dated from the period when Mausolus rebuilt Myndos.
However following a survey of the area in 2004 and a subsequent paper in 2006 by Professor Şahin, of Uludağ University, it has now been proposed that the wall could be considerably older and that rather than being an interim and abandoned single stretch of fortification from the 4th century BC, it is the remains of a Late Bronze Age / Early Iron Age structure that enclosed part of Kocadağ, and as such could be the location of Palaemyndos or Old Myndos.
The claim for there being two distinctly separate settlements dates back to Pliny the Elder (AD23 –AD79) who, when detailing the cities on the Halicarnassus Peninsula, names both Myndos and Palaemyndos implying that both were in existence, or at least still referred to, in the 1st century AD. A reference to both sites was also recorded by Stephanus of Byzantium writing in the 6th century AD.
The first historical reference to Myndos was made by Herodotus who mentions a Myndian ship being part of the Persian fleet which took part in the unsuccessful siege of Naxos around 500 BC, and Myndos is recorded as being a member of the Delian League  (479 – 404 BC). However it has been generally accepted that this earlier Lelegian Myndos was sited on top of Bozdağ, the hill behind Kadikalesi, where there are the remains of a Lelegian circuit wall and the foundations of a large tower on the summit.
Previously the main claims for Bozdağ being the site of the Lelegian settlement of Myndos, rather than on site of Mausolus’s Myndos at Gümüşlük have been:

Professor Şahin proposes that there is evidence to suggest that the site at Gümüşlük was inhabited before Mausolus built the classical city of Myndus(4).
As a part of the survey in 2004 the staff at Bodrum Museum reviewed the details of artefacts that were recorded as being found at Gümüşlük, this exercise identified two fragments of Mycenaean pottery and a marble kouros dating from the 6th century BC. In an addendum the Professor describes how, during the excavations in 2006, they uncovered fragments of pottery from the Orientalising period (7th & 8th century BC) and sherds of red figure and black figure pottery which also predate the 4th century Myndos which the Professor uses to support his theory for earlier activity on the site.
Bean and Cooke, failing to identify any finds earlier than the 4th century BC thought that the wall was somewhat similar to a section of the northern defence wall of Halicarnassus and suggested that as some of the individual stones had been roughly shaped and had “the squarish look of Hellenistic polygonal”, and certainly bore no resemblance to a Lelegian construction. 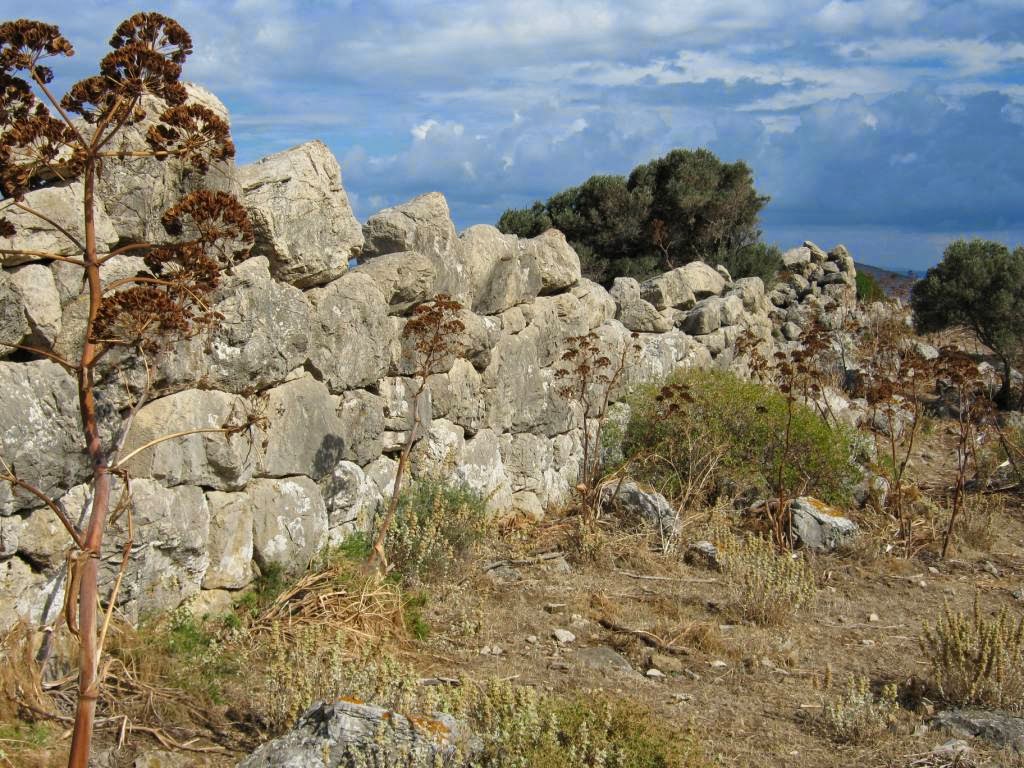 Professor Şahin, on the other hand, believes that the wall may be of a type and age not considered by Bean & Cooke or McNicholl. He proposes that the construction of the wall may be of a style know as Cyclopean, a building technique associated with Mycenaean architecture and similar to those found at the Bronze Age city of Tiryns dating from around 1400 to 1200 BC.
The term Cyclopean comes from the classical Greeks, hundreds of years later, who on seeing the structures thought that only the mythical Cyclopes would have been strong enough to have moved the massive boulders used to build the walls of Mycenae and Tiryns.
The modern description of a Cyclopean structure is along the lines of, huge boulders of un-worked or lightly worked stone, usually limestone, which are roughly fitted together with any gaps being filled by smaller pieces of stone.
Interior Wall at Mycenae
The City Walls of Tiryns


No claim is made for the site at Gümüşlük being a Mycenaean settlement, but it is proposed that the construction of the wall was influenced by the Mycenaean structures on the Greek mainland and that the existing wall is just part of a structure that enclosed a large portion of the seaward side of Kocadağ facing Çavuş Island.
The proposed fortification encloses approximately 20% of Kocadağ with a single L shaped entrance on the lower north western section of the headland. Because of the alignment of the entrance it is suggested that the small bay on the seaward side could have been the harbour rather than the natural harbour used today.
No archaeological finds have been made to confirm the site of the harbour but the 2006 paper does mention the possibility of an underwater survey of the area being conducted in the future.
There is also a suggestion in the paper that there may have been a connection between the main land and Çavuş Island which lies almost opposite approximately 2.3 km to the west.
There is evidence of early activity on the island in the form of terracing and what is believed the remains of a substantial harbour / breakwater visible from the air, but now under approximately 4m of water. No dating evidence was available in 2006 for either the structures underwater or the terracing.

The photograph below shows a rough approximation of the location & size of the fortification, for a detailed drawing of the area see Prof M Şahin's 2006 Paper

The Walls on Kocadağ Recorded by Lt Comdr Graves in 1838


The chart above shows the extent of the walls still visible in 1838, unfortunately there is no distinction made between the cyclopean limestone walls of the Professor’s proposed early settlement and the later green andesite ashlar walls of Mausolus’ fortifications.
It is suggested that the absence of a large part of the cyclopean wall could be attributed to the presence of six lime kilns on the promontory which were in operation during the middle of the last century, and that the wall provided a conveniently stacked, accessible, supply of limestone for processing in the kilns. Evidence of lime kiln operations were also found during the excavation of the baths, where marble had been stripped from the baths and processed to produce quick lime.


As previously mentioned Herodotus recorded that Lelegian Myndos supplied a ship, a captain (Skylax) and probably a crew, in the Persian / Milesian fleet circa 499-500 BC. Professor Şahin poses the following question. As there is now evidence to support a possible settlement, with a potential harbour, on the headland dating from as early as the late second / early first millennium BC with a potential harbour, and Bozdağ, the previously proposed site for Lelegian Myndos, is approximately 1km from the shore line at Kadikalesi where, apparently, there is no obvious harbour, is there now an argument for Gümüşlük also being a contender for the site of Lelegian Myndos?
It is not know if any work has been done at Kadikalesi to identify a possible harbour. The paper does refer to Captain Beaufort, who in the early 1800s suggested that having looked at both coastal areas reflected that the port of Gümüşlük seemed to be the better candidate for Myndos. However it has to be remembered that Beaufort, who was using Strabo’s Geography (first published during the first two decades AD) as his reference, would have only been looking for a single site. Strabo’s entry (14.2.) reads “Then forthwith one comes to Myndus which has a harbour”. Unlike Pliny, Strabo does not mention Palaemyndos.
Notwithstanding the ongoing uncertainty regarding the location of the harbour which would have been the home port for the Lelegian ship that sailed to Naxos, there is increasing evidence for a settlement on Kocadağ at Gümüşlük before Mausolus’ Myndos.
If as Professor Şahin proposes the earlier settlement at Gümüşlük may have been Palaemyndos, what was the relationship between this settlement and the Lelegian remains on Bozdağ?
No one appears to have challenged Bean & Cooke’s original statement regarding the dating of pottery sherds from the pre-historic to the classical, or the significance of obsidian blades, flakes and part of an obsidian core which they also found, all of which would suggest early activity on Bozdağ which continued up until the time Mausolus rebuilt Myndos.


Any possible connection between the two sites will only be reconciled by further investigations to evaluate the periods and scales of occupation. Comparing the dates and nature of any pottery finds should help to confirm the timelines of both sites. The possibility of concurrent occupation is intriguing and would open a whole new debate.